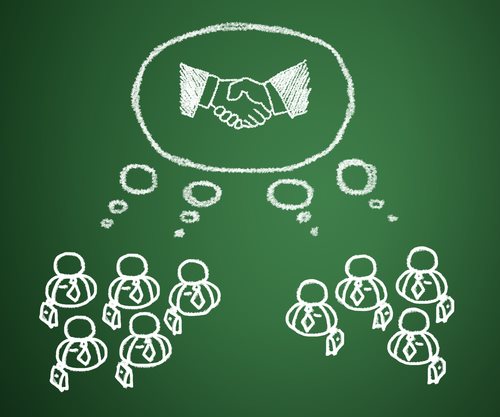 An agreement is the second essential step in creating a contract. A formal contract is now recognized by the signing of a contract. In an informal contract, which is a contract when signatures are not exchanged, acceptance is demonstrated by the actions of the two parties. In a bilateral contract, agreement occurs when the two parties accept the obligations placed on them. When a unilateral contract is in effect, agreement occurs when the offeree completes the action requested by the offeror.
The “meeting of the minds” as a standard for recognizing agreement has fallen out of favor due to the recognition that a court cannot assume to know what is within the mind of any individual. As a result, the court cannot possibly interpret the intentions of any party to a contract at the time they enter into the contract.
There are three tests which the courts use to determine if an essential element of a contract is missing. The first standard that the courts have adopted is the “reasonable person test.” The reasonable person test is designed to guard against any agreement which would be detrimental to the person agreeing to the contract.
When there are elements missing from a contract that is presented before the courts in dispute, the courts employs an “officious bystander test,” which states that terms can be added to a contract in the event that the terms would have been accepted by the parties if only they had been suggested during the negotiations.
The “business efficacy rule” states that a rule can be implied in the event that it would be included by any reasonable businessman in an attempt to make their businesses run more efficiently. The business efficacy rule only allows the courts to add the simplest terms which would lead to increased efficacy.

What Does Without Recourse Mean

Find Out What Estoppel Certificate Cover

Learn All About the Other Interpretation Rules