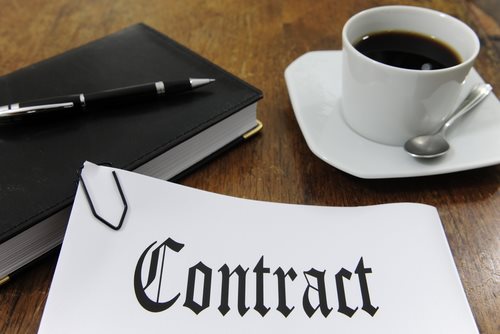 What is the Law of Contract?
As is common with the majority of legal principles, the basic fundamentals of contract law will vary by jurisdictions throughout the United States. In all jurisdictions; however, a contract must require an offer, a subsequent acceptance or agreement to the stipulations within the contract, and consideration.
These characteristics are in essence, the foundation for a document to be regarded as a legally binding and valid contract.
Basic Principles of the Law of Contract:
The law of contract states that the first step required to form a valid contract is that an offer must be formally made by one of the parties to another. A common example to elucidate upon this principle is found in the sale of property; the purchaser, in this example, must make an offer to purchase the underlying property. This offer may include simplistic or complex terms, but it must be concrete and affirmed through written documentation.
Following the offer, the contract, as stated by the law of contract, must be accepted by the offered party. Using the sale of property as an example, the seller must affirmatively accept the offer; the original offer may be accepted in a written or spoken form.
If the offered party proposes a counteroffer, an acceptance is not realized. When a court determines whether or not an offer and acceptance was realized, the judicial body using the law of contract will look for a formal meeting or a concurrence of wills to decide if the requirements latent in the offer and acceptance statutes of the law of contract had been satisfied.
Lastly, the basic principles of the law of contract will require consideration to be given for the contract to maintain a legal or valid status. Consideration simply means that something of value was exchanged between the agreeing parties. In most instances, the consideration takes the form of money or an asset that holds considerable value.
In some scenarios; however, consideration can take the form of refraining from performing a function or doing something that the party is otherwise entitled to initiate. Regardless of the form, the consideration given must be sufficient, but does not need to be adequate to validate the stipulations latent in the contract.
Court Evaluations of a Contractual Agreement:
In addition to the basic principles of the law of contract, a court system, when evaluating the validity of a contractual agreement will evaluate the capacity of the party’s when the agreement was reached. The capacity to enter into a contract may be affected by numerous factors; for instance, minors do not possess the legal capacity to enter into a contract. In addition, a person’s mental state may also be considered when evaluating whether the person had the capacity or ability to enter into a valid contract.
Numerous courts will look to the legality of a contract when determining its validity. If a contract requires an individual to do something illegal, it will be deemed void on its face.

Read These Important Facts About the UCC Corporate Compliance